Posted on April 14, 2015 by Author and Speaker Pamela Foster 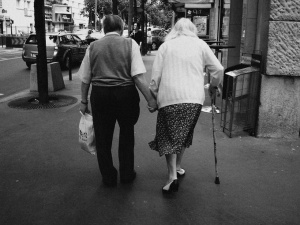 Yesterday I checked Jack into a nursing home. For the first time in the twenty-five years, I cannot care for him and keep him safe.
Through all of our adventures together – scuba diving, backpack travel around Asia, dragging a trailer the length of Mexico and parking it under a grass-roofed palapa on the beach, moving to the Republic of Panama with two giant service dogs strapped to our wrists, riding out a hurricane in a cement block room in the Yucatan – through it all, Jack has bulled and laughed and maneuvered his way through some damn tough spots.
This time is different.
He can no longer bull his way past the effects of the stroke he had four years ago.
Laughing in the face of tremors and dizziness and chronic falls does not save him from the pain of the impact.
His maneuvering cannot stop the creep of dementia.
Six months ago he fell for the thirteenth time in a few months, banged up his entire right side, bruised his knee, ankle, and ribs, and tore his rotator cuff. Everything healed, more or less, except the shoulder.
Finally overcome by the constant pain, he agreed to go in and allow the surgeon to stitch and bind and do his best to repair the damage to the tendon and joint.
At 320 pounds, Jack is almost twice my size. His left side never recovered fully from the stroke and he has limited use of his hand and arm. The stroke took his gag reflex causing him to cough and aspirate liquid and requiring him to eat slowly and carefully. His legs, which were the most affected by that landmine he stepped on outside Danang in ’65, can no longer lift him from a sitting or reclining position. He uses his right arm to get up and down from a chair or bed.
All of these challenges meant that, after the rotator cuff surgery, with his right arm strapped to his chest, there was no way I could care for him at home. It took a very long time to convince the VA that this was true. But with the help of several good people within the Fayetteville VA system, those in charge finally looked away from their computer screens and saw Jack. Bureaucrats and social workers agreed that he could not possibly go home to be cared for during recovery by one crazy-assed woman who loves him madly but is still, only one woman.
So, yesterday, after his surgery, the nurses helped me get him loaded in the car and I drove him thirty minutes up the mountain and checked him into the VA approved nursing home. He will be there about five weeks – until he regains the use of his right hand and arm.

I found the home to be a perfectly nice place. As long as I didn’t allow myself empathy for the old folks sleeping in wheelchairs with their mouths hanging open, or staring blankly at walls, or calling out to me as I hurried past with a sleep apnea machine under my arm, medical paraphernalia slung over my shoulder, and the five sets of clothing marked with the name of the man who is my husband dragging behind me in the suitcase that has seen better adventures.
I have had a few moments of grief in my life. Few people get to be my age without knowing the pain of losing someone or something dear to them. Kissing Jack good-bye and leaving him in the care of strangers is certainly right up there in the top two or three. It was all I could do not to go back in and load him up and bring him home. Even knowing I could not care for him the way he needs while recovering, even understanding that trying to do so would be dangerous to him and to me – still it was difficult to drive away.
I got a call from him this morning saying they tried to put him on a liquid diet. He managed to get himself to the administrator and she arranged for him to have sausage and eggs for breakfast. The old guy in the bed next to him keeps the room too hot so they are moving Jack to another room. And my dear husband has bribed one of the nurses to bring him a milkshake when she comes back from lunch.
I think he’s going to weather this latest adventure just fine.

About Author and Speaker Pamela Foster

Pamela Foster is a speaker and author. Her first book, Redneck Goddess, is available at local bookstores and on Amazon. Her second book, Bigfoot Blues, will be available in August 2012.
View all posts by Author and Speaker Pamela Foster →
This entry was posted in aging, grief, marriage, nursing home and tagged aging, nursing home, PTSD, rotator cuff, surgery, veterans. Bookmark the permalink.